Legendary soul singer Macy Gray has returned with a new single, 'Buddha', which is lifted from her latest studio album, Ruby. The song sees Gray express through soothing vocals the inner musings of her spiritual journey towards mental wellness.

Though not labelling herself as a Buddhist like the song title might suggest, the teachings of the Buddha himself have evidently made a positive impact on Macy's life and mental health. "My favourite quote of his is: 'Concentrate the mind on the present," Gray explains. "When you live like that, you can drop your regrets in the past and not stress about the future. You become light. It makes space in your brain for creativity.'" Lines from the song such as 'Our future is in the air and the past is in the ground' echo this sentiment, pointing to a deep resonation and implementation of the moment-centric nature of Buddhism.

The track also explores how today's tumultuous political and environmental climate can affect one's mental wellbeing; "You have to engage because everything matters and everything affects us," Gray articulates. "It's not about protecting yourself from what's important - it's about doing something about it."

The release of 'Buddha' comes with an aspect of collaboration between Macy and her followers. "We had a contest on Instagram asking for fans to design the cover for 'Buddha'. We got about 300 submissions! It was REALLY hard to pick one. We finally did, and I think it's incredible." The chosen image depicts a peacefully invigorating landscape where Macy is at one with both nature and existence itself, embodying the earth and the elements. 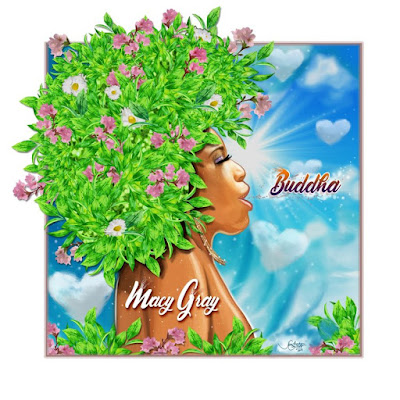 Alongside Buddhist wisdom, Macy identifies music itself's ability to heal and provide reprieve; "Music is the great mental break. Your favourite song comes on, and for that three and a half minutes, you got no problems. Life is beautiful, and you are the sanest person on the planet." Regarding if working the music industry ever had any ill effects on her wellbeing, Gray says; 'No. Actually, if I didn't have music - I'm sure I'd be dead!"

Latest album Ruby is strewn with other hard-hitting songs coming straight from within. When asked what the most important song on the album is to her, Macy admits it's final song, 'Witness'. "It's about my mom and my kids and how I wish I could just fix everything for them so they'd never have to hurt."

From the late 90s up until now, Gray has managed to consistently release records over an altering musical landscape. "Mostly I've been able to define who I am as an artist and what I'm good at and where my lane is," she contemplates, in regard to how she may have evolved as an artist in that time. "I'm always terrified and fearless at the same time. That hasn't changed. But everything else has come a long way."

And with her 10th album now out of the way, what can we expect from Macy Gray going forward? "Only big things!" she states, showcasing a laidback positivity that can only further promote the Buddhist wisdom conveyed in her new single.