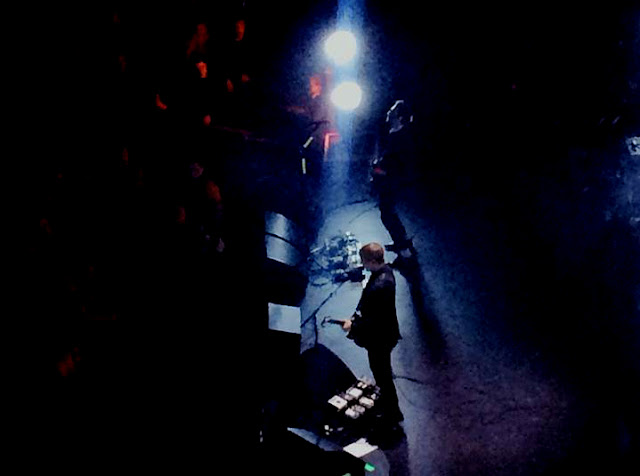 Interpol are able to articulate the inarticulable - emulating through their songs the nonsensical tangles that lie under the subconscious. This musical replication is portrayed with a poignant darkness - naive at the core due to its purity - the subtle yet profound beauty of the display amplified by a recognition from deep within the listener.

Their gig at the Royal Albert Hall allowed this experience to fully envelop the audience, who bathed for 100 minutes in the band’s full sounds, cascades of which encompassed the whole being. Their performance was accompanied by sporadic splashings of delicate lights, penetrating through the darkness and bringing to life the previously untouched dark pools of the soul that Interpol’s music reflects back to us - or, as the band themselves would say, those ‘silent parts.’

After a polite introduction to the London crowd, the sleekly black-clad band members burst into the night’s opening song, ‘Untitled', which was unprecedented in contrast to the band's demure presence. The evocative ascending melody of the song was enhanced by its simplistic yet affecting 1-line lyric (which grew in poignancy as the song reached its climax), leaving the audience captivated from the very first note, and fully enamoured by the last.

‘Slow Hands’ saw guitarist's Daniel Kessler's dark dance across the stage accompany Paul Bank's visceral narration of the upbeat number. The appearance of the band's signature song so early in the night  - a few places after the equally popular ‘Evil’ - signified that no holds were barred in the epicness of the songs being played that night. That the number of great tracks were both unknown and limitless.

‘NYC’  - a dark portrayal of an internal experience of New York City life - was a highlight of the night, filling up both the spaces of the venue and the senses with a pleasurable static. The uplifting - yet signaturely jarring - repetition of 'It's up to me now, turn on the bright lights' verberated up and down the cylindrical theatre, whilst confetti-like spots of lights slow danced across the seats and balconies of the venue.

The Royal Albert Hall's forlorn beauty and immersive nature lent itself perfectly to Interpol. This became particularly evident in gothic number ‘Lights’, where Banks's deep, searing vocals were suddenly reflected by the arches of the hall in front of him being sinisterly lit up in red - the corpse of the venue dimly coming back to life, summoned by the haunting tones. Whilst the whispering backing vocals’ repetition of 'that's why I hold you' punctured the song both eerily and comfortingly.

As the night progressed, more rousing renditions of classic tracks were bared. The latter half of bruisingly melancholic ‘The New’ saw a drilling of guitars quickly soften, morphing into a bliss point derived from a variation of extremities that only Interpol can pull off. Finally finishing off with delicate, tingling notes that pleasantly penetrated the skin of the observer, fading back into the soul from which they came.

The setlist was a superfan's dream. Not only abundant with songs from the band’s formative first two albums, but also showcasing rarer favourites such as ‘Rest My Chemistry'. Which saw whimsical notes and purposefully jarring guitar glitches merge to depict a profound moment of hope amidst the bleakness of an addict's life, and in turn, forming a song the body can't help but move along to. This neglected song being revived, like dust falling off a precious jewel, in the all-encompassing venue was an experience that even more casual fans - whose voices became quiet upon hearing no resemblance in the song's first chimes - would later come to appreciate being a part of.

The intermingling of the band’s new songs among a backdrop of notable favourites - in which they blended in seamlessly- revealed their quality. Songs such as 'Complications', from latest album Marauder, complimented Interpol’s evolving 10-year discography, adding further dashings of variety to their presentations of their growing repertoire.

Finally, after the thankful goodbyes and subsequent departure of the band from the stage, a potent pause was followed by a satiating three-song encore. The finale ended on highly anticipated cult favourite ‘Stella Was a Diver and She Was Always Down’- a song which details the plight of a woman who spent her life (and death) being 'down' in more ways than just one or two. The irresistibly unsettling 7-minute ballad culminated in intensity as Bank’s powerful, increasingly malignant vocals repeatedly called out 'Stella I love you' - giving way to an aching final chorus, melting into lingering vocal utterings and hauntingly strained instrumentals, which brought both the song - and the night - to its end.