The 100 Club Decide to Stop Releasing Gig Set Times. A Step in the Right Direction or a Detrimental Leap Backwards? 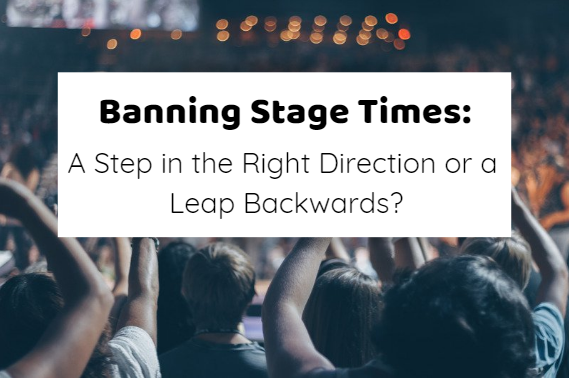 As convenience culture progresses, I've found myself silently thankful for an advancement that's become a norm in the world of live music. That is, the availability of stage times.

Memories of attending gigs as a teenager are, of course, filled with life-changing experiences of basking in the music of my favourite bands, and discovering new ones by way of them playing in front of me. But there was another, less favourable, constant that made up more than half of my gig experiences during the 00s. Waiting.

As a young and wide-eyed music fan, a gig wasn't a gig unless I could experience it from the front row. This meant voluntarily queuing outside the venue doors (often solo) from anywhere between 1-12 hours, depending on the artist's popularity. Then, after finally getting into the venue and securing that coveted spot in front of the rails, the feeling of relief would be fleeting; the battle had only just begun. Hanging out leisurely with fresh air against your skin in no way prepares you for the elongated warping of time experienced in a blackened venue, waiting for bands to actually come on stage.

Time has a habit of going by painfully slowly when you're constantly fixated on keeping your spot. When the black space in front of you is interrupted only for setups to occur. When soundcheck seems to last forever, only to finally give way to the static scene of a band's kit to tease you perpetually. When the filler songs blasting from the speakers seem to go on infinitely - the gaps between them prompting hopeful cheers to erupt and then extinguish, eventually becoming a tiresome, repetitive event. When you're given no indication of how long it is you will actually be waiting.

Of course, when the band(s) you've been awaiting finally storm on stage, the previous, slightly torturous time spent in limbo quickly fades into the distance, with every minute of it becoming instantly worth it. Perhaps all the desperate anticipation makes it even more magical and momentous when the act finally does take stage. But this effect wasn't so potent that the experience of pure 'waiting' doesn't haunt me when I look back at the gig memories from my younger years. 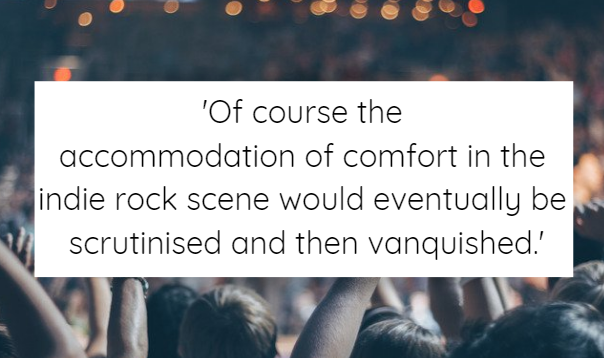 As I grew older, and my teenage exuberance faded, my priorities when approaching gigs shifted. The downside of wasting valuable time (and sanity) just to get a better view started to outweigh the benefit, and an anxiety disorder was introduced into the picture. And so being pushed into a barrier by hundreds of people for an unmeasurable amount of time with no food, breathing space or phone service stopped being a viable option for me. I instead took to turning up to gigs 'right on time'. Which would sometimes mean right as the support would start playing. Or, if feeling particularly lethargic that evening or short on time, in the interim before the headlining performance. There have even been times where - during periods in my life where I was experiencing frequent panic attacks - I would arrive just in time to see my favourite band or artist play, then quickly slip out the door before the end of their last song of the night.

(Well, I would at least attempt to approach gigs with this level of precision. I won't forget the one time I underestimated when Jack White would rock up for a gig at the Kentish Town Forum, and spent the entire set watching his shadow, unable to fit inside the main room, nor actually see the physical form of the man himself.)

Luckily it didn't take long for the concept of letting audiences know the stage times of the night to catch on. In the last few years, whether it be an automated message on a venue's phone line, a tweet on a venue's page, a print out inside the building walls, or even a DM to one of the acts themselves, I could always guarantee the obtainment of set times for any live music event I was attending. And it was much appreciated.

So you can imagine I wasn't too thrilled when I woke up today to find that this gigging lifesaver was under threat. The elimination of the trend being pioneered by London venue The 100 Club. Whose original social media statement reads:

'The 100 Club is no longer giving out stage times to any gig we put on. We want to support all bands that play here and so would like people to watch the support acts too. It’s a great way to discover new music.'

My first reaction to this announcement was 'oh no - they're on to us'. Of course the need for - and accommodation of - comfort in the indie rock scene would eventually be scrutinised and then vanquished. But then my second reaction quickly followed; does this change actually make logical sense? More often than not, when I'm seeking out stage times it's to make sure I don't miss the support bands - who are sometimes who I'm mostly there to see. As someone who isn't a fan of staring at the ceaseless still image of a band's set, I rarely arrive at a gig as soon as the doors open. But I also often don't want to turn up so late that I actually miss the opening act altogether. And apparently, I'm not the only one who utilises set times in such a way. 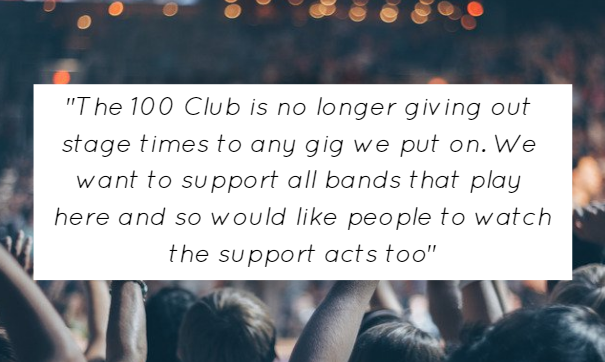 Hoards of riled up social media commenters echoed my sentiment. Many also pointed out that luring in a bunch of unwilling, confused gig-goers to see the supporting acts would lead to a less than enjoyable atmosphere for the artists to play in. Others highlighted that the need for allocated slots is simply one of logistics; people use stage time to plan when to leave work, when to eat, and to figure out if they can make the last train home. Solo gig-goers also pointed to the avoidance of boredom as their reason for wanting them - a concern I find myself relating relate to.

Of course, some may suggest that you should be spending that downtime meeting new people. That the spirit of rock and roll isn't worrying about when your last train home is. But I'd say that that's (sadly) a bit of an idealistic notion. Sometimes life just gets in the way.

Most importantly, those with disabilities and mental health conditions explained via tweets and comments that the lack of knowing when bands will hit the stage will make gigs less accessible to them. The 100 Club has briefly responded to these concerns, stating that 'anyone with health issues will not be adversely affected.' Though, even if this is the case, it is unfortunately a possibility that those with mental illness could still fall by the wayside.

Whilst, as a strong believer that support acts warrant a lot more attention and respect than they often get, I can't help but feel that this conduct is going about things the wrong way. From my experience, even without set times, most attendees will make fairly accurate estimates of when each slot will take place and will base arrival times on that. Refusing to explicitly administer the times won't change much, other than add an unnecessary element of inconvenience to some gig-goer's experiences. And the (fairly aggressive) feedback The 100 Club has received across social media has shown that, in reality, there are a multitude of reasons - other than dodging the supporting artists - for audiences to want to seek out stage times.

The 100 Club has acknowledged the backlash they received, stating that they will rethink their decision and aim for a 'middle ground'. Perhaps the world isn't ready to regress back to gigs without published stage times after all.