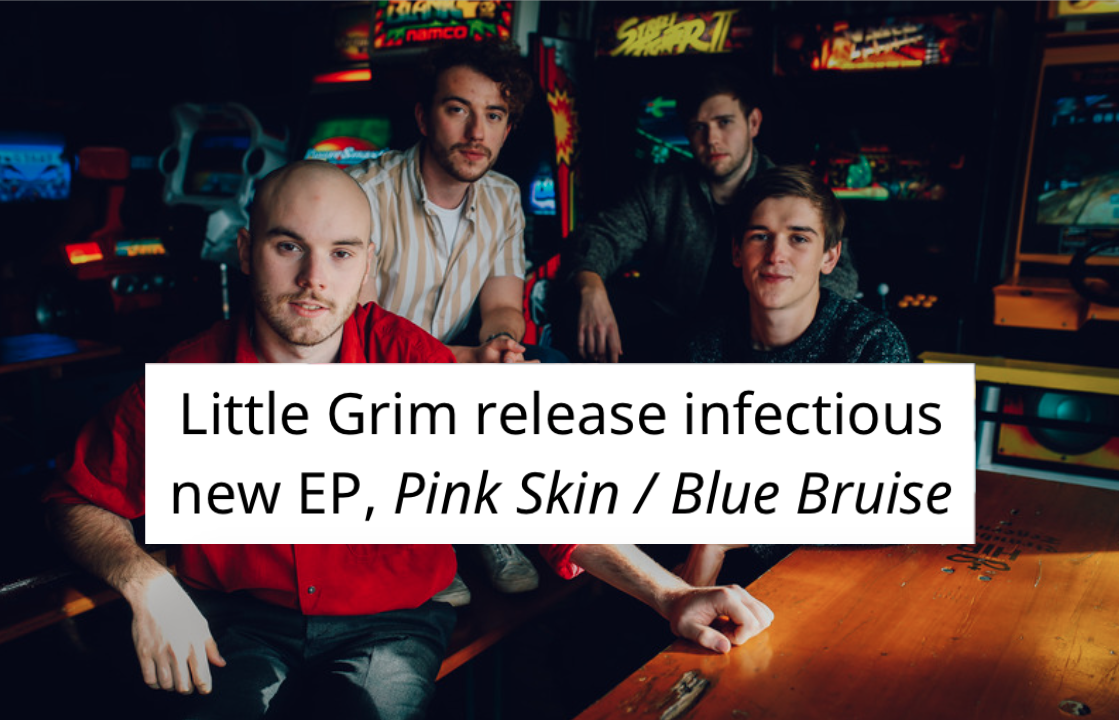 After building up popularity the past few years within the London gig circuit, South London based alt-indie band Little Grim have released their debut EP, Pink Skin / Blue Bruise.

The 5-song EP opens with ethereal indie-dance track, 'Infectious', which is comprised of softly haunting melodies, cutting vocals and trance-like musicality. The track reaches its height when it culminates in rhythmic, psychedelic chants that relay the EP's bitter title, portraying them with a dark euphoria. This melding of melancholy and danceability found in the opening track sets the tone for the rest of the EP.

Frontman Joe Murphy considers Little Grim's penchant for exploring brooding themes through dance beats: "I’ve never really thought about how or why the songs come out the way they do. I do vaguely recall Jeremy requesting that we add an element of fun to my depressing ideas back when we were at school. Maybe that stayed in my subconscious?"

"I do think that some of the points of the lyrics are delivered better over an upbeat soundtrack though," he continues. "It offers a bit of a double edged meaning which might catch you off guard. I like the idea that the song has two faces, one which you can consider the idea of, and one you can just groove to."

The second song of the EP, 'Play Nice', reflects this notion. The track features funky riffs, fluid vocals and synth distortions, which fuse together to create an irresistible, soulful song depicting relationship conflicts that doesn't fail to get the body moving.

The exposing of the darker elements of reality that lie beneath the surface seems to be a theme that runs through Pink Skin / Blue Bruise. In the track 'Silence', the dark parts of the mind are on display. The song details the mental battle of feeling alone and depleted in a busy city that never rests. The isolated chorus - which simply states 'Oh what I'd give for silence' - sits in contrast next to a busy verse, both accentuating the simplistic need for quiet, and highlighting the feeling of loneliness the song portrays.

Regarding the relationship between songwriting and mental health, Joe explains: "When I was writing music as a 16 year old, I didn’t realise that it was the thing that was helping me process my emotions in a way I could comprehend. It’s only since growing up that I have realised just how much I do rely on it. [Being upset] usually means that I’ll write a few more songs that I’m happy with." He continues, "I would say that writing has offered a way for me to take a moment in my life, wrap it up into a neat little package, and reflect back on it in a way that feels healthy."

'Exit Light' - a highlight of the EP - cleverly evolved from a failed attempt at writing a love song. "I always cringe at my lyrics when they feel too cheesy," Joe explains. "It felt like there needed to be another darker message behind the song. At the time I was reading American Psycho, which took quite an influence on me. I wondered what love could be like from the perspective of Patrick Bateman."

The track sees sweet and punchy melodies and vocals contrast the more sinister lyrical themes of blood and manipulation; this duality perfectly encapsulating the emotionless, psychopathic tendencies portrayed at the root of the song. The gently upbeat, whimsical verse and chorus are almost mocking, and are punctuated with a hard-hitting, pop-punk style interim and a crashing guitar interlude, playfully hammering home the intensity of what lies beneath. 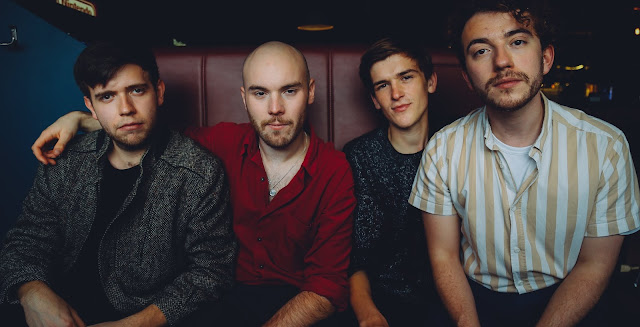 "Since [Exit Light]," Joe continues, "I've been really interested in hybridising my feelings with other people's - fictional or real. A new song we've been working on channels ideas from drag queens on Ru Paul's drag race." Definitely one to look forward to.

Final track of the EP, 'Hoodie', jumps in with delicate guitar cascades and a soft, viscerally delivered falsetto, which - as the song builds - become further enhanced by ascending percussion and string accentuations. The track features an anthemic indie chorus, irresistible in its sing-along nature, and ever moreso for featuring everyone's favourite counterpart to heartbreak; hope.

Pink Skin / Blue Bruise comes alongside a special show at Paper Dress Vintage in celebration of its release. Joe fills us in on what to anticipate on the night: "It's gonna be one of our biggest shows and we've booked a banging line up to support us: our friends from Beautiful Thing and The Paisley Daze. We've got all the songs cued up from the EP with some naughty new ones which are scheduled for release this year. It's gonna be a good one."

And what else can we expect from the band for the rest of 2019? "More music, bigger shows and more uncomfortable Instagram stories featuring close ups of our faces." Sounds perfect.