In a dark underground space in Shoreditch, comprised of exposed brickwork and hidden spaces separated by grandiose, low hanging arches, Sons of an Illustrious Father play an intimate hour-and-a-half set, their performance reflecting the dusky atmosphere of the dimly lit venue.

Sons of an Illustrious Father’s stage show conveys the comfort and closeness of a band who’ve known each other since their teen years. They work tandem, with members of the three-piece band swapping instruments and taking each other's place at the forefront, and, in turn, adding their own essence to the song at hand. The result is not messy but concurrent, resulting in energy levels that don't waver, and an undercurrent excitement lacing each track. 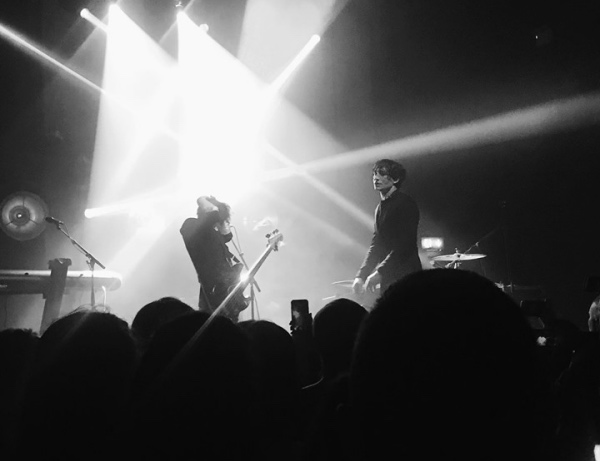 Mid-set the trio abandoned their instruments and took to the perimeters of the stage for a moving acapella of 'Ella's song', originally performed by Sweet Honey in the Rock and written in tribute to prolific African-American civil rights activist Ella Baker. The presence of this song in their set was apt for a band who, at the bare bones of their music, are focused on activism and the exposure of social issues. And their soulful cover of the traditional song - performed without breaking from physical touch, signifying a unity with each other and with the cause - allowed their for genuineness and lack of pretension when approaching said issues to become apparent.

A highlight of the night was the band's own rendition of 'Don't Cha' by The Pussycat Dolls. The trio performed a sultry, slowed down version of the hit. The brooding, goosebump-enducing cover was delivered with a sensual laziness, and enhanced by piercing rock overtones.

At the end of the night the trio gave a thankful goodbye, before returning for an intimate encore. Their reappearance saw the night close with the band's signature anthem 'U.S.Gay' - a heartfelt response to homophobia in US society, earnestly conveying both heartache and hope in equal measure.